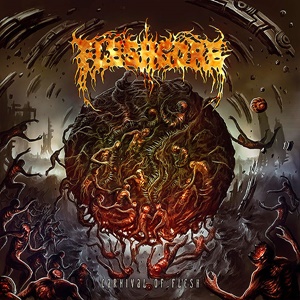 Little mystery as to what pours from your speakers when looking at the moniker of Ukraine’s Fleshgore. Active since 2000, this brutal death metal act has released five albums and three EPs over the years, also gracing stages across mainland Europe and Australia, beyond legendary festival appearances at Wacken, Brutal Assault, and Obscene Extreme among others. Numerous lineup changes have occurred in the twenty-two-year existence of the group, with only guitarists Igor and Sad still soldiering on from the inception days. Grabbing an Italian vocalist Michele in 2020, the quintet set about writing new material in the infamous ‘pandemic’ downtime – which is what comes to fruition for these ten tracks.

The latest album Carnival of Flesh does not veer beyond the conventional blueprint for this genre – as this is a face-melting affair piling on the growls/semi-pig squealing vocals, hefty riffs, and a mix of speedy blast-beat oriented tempos as well as the solid mid-tempo parts that hurtle bodies into the stratosphere. The abilities to turn on a dime through blasting situations and relatively controlled transitions creates this heightened sense of anticipation – chunky riffs that parade into deadly spirals of evil terror, while Michele roars viciously in tandem to the aural proceedings. Even when things appear chaotic, these musicians reign in specific earworm spots that force mandatory headbanging – as the slower sections of “Buried Truth” and “Invisible Reality” illustrate (the latter featuring some killer bass plucking from Ruslan). Much of the influences intertwine the straightforward aspects of early Morbid Angel with the slamming nature to say Internal Bleeding, but also pushed through this European lens, where the finesse and sophistication of the riffing, lead breaks, and transitions are tight as a whip. The drumming of Ed certainly deserves heaps of praise, his shuffling of speedy snare hits to straight ahead groove mechanics while going nuts on the fills/double kick duties is outstanding – check out his work in “War Is An Amusement” or opener “Distorted Lights” as highlights.

Sometimes ardent followers of a specific genre don’t want their bands to stray far from the mold – just continue to pile on the brutality, create memorable riffs/hooks, and move forward to the next record. That’s what you’ll get from Fleshgore, as Carnival of Flesh tears limb from limb, adding plenty of fuel to the fire as these gentlemen get back to crushing stages worldwide. 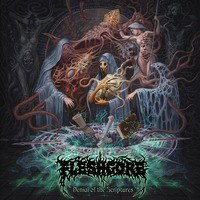