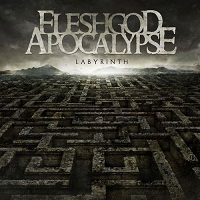 Fleshgod Apocalypse hails from most epic city in recorded history, and they sure sound like it.  This Roman technical death metal band, with an equally prominent symphonic side, now delivers its third album since forming in 2007.  This release, Labyrinth, is a concept album about the mythological Labyrinth of Knossos (built to contain the Minotaur), and takes the listener on an intense, moving and exhausting journey.

The level of symphonic composition and musical prowess displayed on Labyrinth would garner high marks from most reviewers, I’d reckon, even without regard to the nuts-and-bolts of the songs herein. This is a band that belongs firmly in the upper echelon of extreme metal, to be sure.  Their sound is as intense as it is grand.

On my first run through Labyrinth, I found it almost too much.  The impressive drumming of Francesco Paoli just does not let up for very long.  At the same time, there is much going on texturally and could threaten to run the risk of oversaturation.  But as with many great albums, the more listens, the more you hear the parts and thus can place them in your mind.  And once you fit the parts into place, it’s really quite magnificent stuff.   Perhaps there is not a ton of room to breathe on this album, and I guess this could be my only personal qualm with it.  Fleshgod Apocalypse keeps a punishing pace.

Having said that, there are certainly moments of respite.  Peppered throughout the album are sections of interlude and tonal shifts created with piano, classical guitar and cello.  The instrumental title track begins with a mournful Andante piano section which expands into a powerfully melancholic piece, through the use of strings and choir, relenting back to solo piano to rein in the end of this very impressive album.

What I really enjoy about Labyrinth overall is that it is powerfully dramatic.  Fleshgod has recruited operatic vocalist Veronica Bordacchini for this album she is, without a doubt, one of the highlights.  Maybe the suggestion of Labyrinth being a “death metal opera” might be an appropriate description.