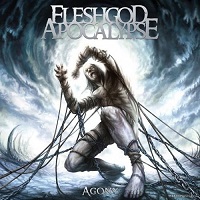 Always thought “Fleshgod Apocalypse” was a gnarly name, one that evoked visions of all things savage and cinematic. Plus, it’s not very often someone uses “apocalypse” in their moniker and comes out on top (see: the boorish This or the Apocalypse, Zombie Apocalypse, etc.). Nevertheless, Fleshgod Apocalypse is an orchestral death metal ensemble from metal, who have made the jump to Nuclear Blast for their second album, Agony.

Let’s not confuse this with the similarly-styled Mayan, who also go the symphonic/orchestral route. FA is much more involved and grandiose, even to the point of being annoyingly pompous, which works in the context of death metal. And because the band’s sounded is rooted firmly in the technical death metal sphere (the maniacal blast portions of “The Violation” support this claim), there leaves little room to get cuddly with soft and reflective portions, something those on the symphonic power metal spectrum love to do.

Agony is a ferocious lot; hovering above the lines of modern-day Dimmu in terms of employing orchestral movements, except for this shit is much more brutal. Drummer Francesco Paoli is always on the go, blasting away like a madman, oftentimes pushing these songs to the brink. In fact, it feels like most of the album equates to the visual of a crazy car chase or action scene, blanketed by chunky rhythms (“The Egoism”), thrash tempos (“The Betrayal”) and Goth piano work (“The Forsaking”).

If Agony is a bit too much then yes, it definitely is. Fleshgod Apocalypse’s unwillingness to lay off the throttle is both a blessing and a (would-be) curse, for Agony gives the listener absolutely zero chance to chill out and soak things in. Not that we have anything against that – it’s all action, all the time over in these parts anyway. An exciting proposition, these Italians.