Fleshcrawl – Into the Catacombs of Flesh (Apostasy) 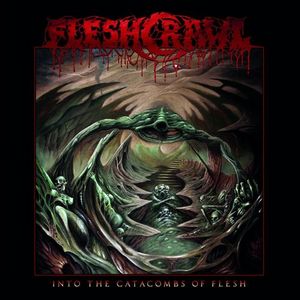 A German death metal act that blazed through the ‘90s and early ‘00s with numerous releases, it’s now been twelve years since the band’s eighth album in 2007’s Structures of Death. Given the dramatic upswing in old school sounding death metal in that dormant period of the band – how does their particular version of death metal hold up to what plenty of others are churning out nowadays?

Turns out, it holds up quite well. Those who have dedicated themselves to the genre for lengthy spans of time no doubt have a good grasp of what it requires. Into the Catacombs of Flesh is exactly that – it’s old school sounding, with a bit of HM-2 crunch but not solely dependent upon it. Instead the thing that works best for Fleshcrawl is their ability to compose more dynamic songs. Despite the death metal aggression, there’s a lot of melody to contrast against it. Nothing that feels out of place mind you, but enough is there to keep the songs feeling fresh and interesting, while still being able to deliver that sledgehammer swing of brutality. While a track like “Obliteration Bizarre” is a full-throttle gutpunch, others like “Suffer the Dead” thickly lay into grooves and the title track indulges in some catchy melodies and atmosphere. It’s all about the peaks and valleys, and Fleshcrawl nails this aspect.

While it doesn’t exactly reach outside of the death metal norms, Into the Catacombs of Flesh does exactly what it needs to. Considering the twelve year draught, it’s clear they’ve lost none of their spirit or spitfire – this album packs together plenty of brutal energy, melodic solos and riffs, and no shortage of groove to give a dynamic and interesting feel. Sure to give old school fans a run for their money.