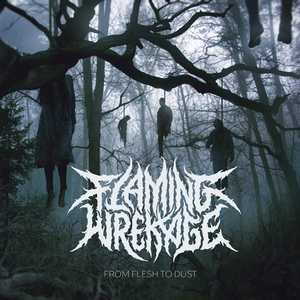 When asked the question, to thrash or to groove, the answer of course is, why not both? Such seems the mentality of the up-and-comers in Australia’s Flaming Wrekage. Their second album, coming after a 4 year wait from debut Catharsis, incorporates a classic thrash approach while tending to some melodies and modern groove.

While the thrash template in this case is somewhat fixed, it doesn’t stop the band from coming up with energetic riffs that weave together some catchy melodies with breakneck aggression. It’s not overtly technical (a la tech death) but the intricacies within allow for some closer listening to some of the faster material, which aids in the playback factor. Look no further than the opening thrasher “Ensnared” to get a pure taste of what Flaming Wrekage can do. Throaty screams seek to increase the heaviness in the band’s attack, which is occasionally bolstered by some massive grooves. “Desperation Bleeds” personifies this well, with infectious and slower grooves initiating some mandatory headbanging alongside a number of melodic riffs. If there’s one fault, it’s the 7-minute instrumental track “The Onslaught,” that despite some pretty strong grooves and a wicked solo, just feels bloated in the long run.

Flaming Wrekage makes the most of what they have with the elements that they bring to the table, even if there’s little variation from what others have tried to capture. The songs ring true though, as a testament to the catchy songwriting that veers between galloping thrash and heavy grooves. Hard to knock much of what’s being presented on From Flesh to Dust.