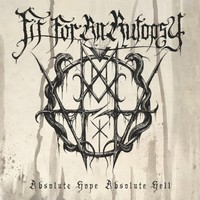 Considered by many to be one of the strongest of the deathcore crowd, Fit for an Autopsy suffered a big blow when vocalist Nate Johnson decided to bail on them last year. Well-known in the metal circles, he left some big shoes to fill. Thankfully, Fit for an Autopsy was up for the challenge – Absolute Hope Absolute Hell is easily the band’s finest offering yet.

Perhaps it’s a bit of disservice to label Fit for an Autopsy with the deathcore tag – their music has always strived to be more than that. Hellbound was a significant jump from The Process of Human Extermination, and Absolute Hope Absolute Hell is another significant jump from Hellbound. Instead of doing the same old thing, the band has incorporated new and improved elements with each new album. With Absolute Hope Absolute Hell, the band has not diminished their brutal snarl so much as diversify it. There even some moments of melodic calm that sink in from time to time. “Swing the Axe” has some undeniably catchy riffs that almost border on melodic death, “Open Sea” begins with acoustic guitars, and “Mask Maker” utilizes some shouted, somewhat melodic vocals in addition to the usual upfront roars and some riffs that have an almost post-metal flair in their melancholy. The best part is how easily they infiltrate into the traditional elements that have built up Fit for an Autopsy over the years and it’s a true testament to their songwriting. On the other hand, “Wither” and “Murder in the First” will give long-time fans what they crave – visceral riffs and bonecrushing breakdowns (with none of the added fat). Finally, new vocalist Joe Badolato easily fills the growler position, carrying the lower range dutifully yet adding some additional dynamic that was lacking in previous efforts.

With three albums now under their belt, the future is looking solid for Fit for an Autopsy. They’ve proven themselves quite successful at implementing new ideas and techniques into their playing while keeping the no-compromise, frantic origins firmly in check. They’ve proven themselves to be one of the few ‘modern death metal’ acts worth checking out, and could really become leaders as they continue to evolve.