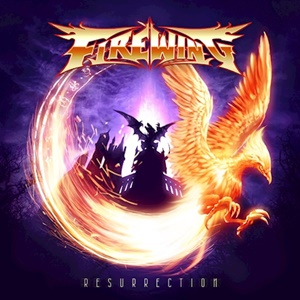 A new symphonic metal act with members from Brazil and the US, FireWing issues a debut album in Resurrection featuring two mystical creatures (Ember and Vishap) blending different mythologies into a new world. With main lineup expertise including the rhythm section of Seven Spires (bassist Peter de Reyna and drummer Chris Dovas) plus guest support with members of NorthTale, Aversed and Carnivora among others on guitar/vocal fronts – you’ll get fourteen tracks and almost a one-hour playback full of ambitious songwriting, mixing ballads, power metal anthems, and stirring mid-tempo outings.

Older Kamelot comes to mind sound-wise for “Demons of Society” (even with Chris Dovas’ blast beat surprises), passionate, multi-octave heroics penetrating from singer Airton Araujo while the almost eight-minute epic “Time Machine” featuring Jenn Sakura on duet vocals showcases the cinematic, lighter strokes at the start before Caio Kehyayan and Bruno Oliverira fill the arrangement with great mid-tempo power chord and orchestration splendor. Four shorter interludes appear to break up some of the regular songs – and there are times where specific instrumentation gains the spotlight on other songs such as the bright piano hits that open “Eternity”, the mid-section featuring a quieter narrative sequence that aids the storyline before ramping back up into some neoclassical power metal action. Another highlight would be the two part “Tales of Ember & Vishap” saga – “How Deep Is Your Heart?” a sweeping semi-ballad between Airton and Haydee Irizarry that transforms into a heavy, circular progressive effort while “The Meaning of Life” hits all the benchmark power drama aspects vocally and musically one expects in a record like this. Mixing and mastering duties by Jack Kosto (Seven Spires) also align well with the power/symphonic metal proficiency on display from the band.

Add in the killer logo and golden/purple hues and visual elements present on the cover and it is not a mystery where FireWing are coming from in terms of substance and style. Resurrection establishes the band as capable players, hopefully willing to stretch a bit more as they gain more seasoning as there is evidence where their affinities lie for those into Kamelot and Rhapsody (Of Fire) with a bit of Dream Theater in the mix.