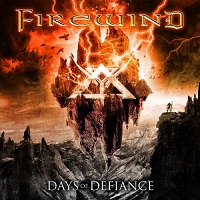 All eyes are on Gus G., especially from the casual mainstream heavy music follower who probably just discovered this axe-slinger’s skill set taking over for Zakk Wylde as Ozzy Osbourne’s guitar man. Those of us stalwart metal maniacs know Gus from his work in Mystic Prophecy, Nightrage, and Dream Evil through the years, but Firewind has always been his main original productive act, releasing five power metal albums prior to Days of Defiance.

Does this latest album deserve wider adulation and popularity? I would safely say that following the 35-second acoustic opening to “The Ark of Lies”, Gus comes out of the gates with a fireball riff attack and vocalist Apollo Papathanasio delivers the complementary blues based melodic metal pipes you expect much like the old Dio/Blackmore or Coverdale/Sykes days. As a band, Firewind prefer to keep the emphasis on catchy verse/chorus oriented material, leaving most of the shake and bake instrumental flexing for the solos or brief interludes like the keyboard galaxy event “The Departure” or the 5-minute plus sans vocals “SKG” where keyboardist/guitarist Bob Katsionis puts on a speed finger play clinic of the neo-classical kind.

Those who love faster numbers that showcase drum work fueled by hurricane arm/leg movement, a firm keyboard underpinning and the back and forth chemistry that classic singers and guitarists feed off of should delight in the Rainbow-like “Heading For the Dawn” and “When All Is Said.” Contrasting that material you can count on a few tracks with definite commercial

potential- such as the Riot-meets-Maiden dynamic within “Chariot” or the quieter power ballad “Broken” where Apollo’s bluesy charm shines.

Days of Defiance contains the desired balance between the average Firewind follower’s expectations and the five piece’s insistence to challenge themselves in terms of technique and songwriting ability. If pushed correctly, Gus G and Firewind could get used to a hefty touring cycle and bigger sales as this clearly is their most accomplished album to date.