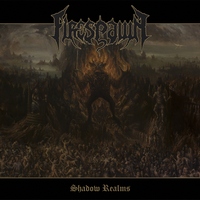 What happens when you put together a bunch of death metal musicians in a new group? Well, the most logical conclusion is that they make some death metal! Firespawn is the latest of that dreaded “s” word that we all know gets used way too much. Comprised of Entombed (AD) members LG Petrov and Victor Brandt, along with Alex Friberg (Necrophobic), Fredrik Folkare (Unleashed/Necrophobic), and Matte Modin (Dark Funeral), it’s reasonably safe to say that you’ve heard all these guys music before…just not at the same time.

Thankfully, Firespawn sticks to the death metal formula but not exactly the Swedish format. The band wisely chose to avoid much of their own stomping grounds, utilizing a more “Americanized” approach in terms of heft, with a feel that looks to the past but isn’t entirely stuck there. Petrov went so far as to gutturalize his vocals a bit from the Entombed standard, which also helps to give the band a more distinct identity (as opposed to “Entombed with Americanized riffs”). There’s not much further depth to the band’s goals other than to play some brutal death metal, and on that front they do succeed. This isn’t exactly blast-intensive death metal, and most of the destructive power comes from the riffs. “Infernal Eternal” ends things the way most bands attempt to open, choosing to end the album with the most caustic serving – though it works well to ensure you want to listen again. There is a tinge of melody to the riffs for the most part (which should be expected with the band members involved), but it doesn’t get in the way of the fireworks. Some other highlights include the bordering on thrashy intro to the title track, the energetic and groovy punch of “Spirit of the Black Tide,” and ‘march-onward’ riffs of opener “The Emperor.”

A fun and enjoyable death metal experience is to be had with Shadow Realms. It doesn’t deviate much from what you’d expect it to be, but cements these guys as a bunch of death metal-worshipping fiends that care enough to give us an additional, quality outlet.