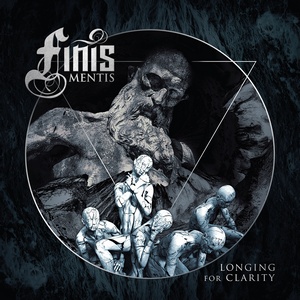 Preconceived notions can be a funny thing. Taking a quick look at the press pack for Finis Mentis, a 2-person act from Finland for some reason gave an impression that it was going to be a run of the mill symphonic metal act. But there’s nothing like having one’s expectations subverted in a good way, and Longing for Clarity ends up borrowing as much from melodic death metal as it does the symphonic side of things.

The title track brings in an instrumental opening to the album, one that fits the more epic sound of the EP, and providing a suitable segway into “Oceanwild.” Here, the initial thoughts of this being a more symphonic act were solidified within the first few seconds (after that opening of course). Katri Snellman’s vocals lead the way, along with some melodic riffing along the way. But halfway through the track, the twist of harsh vocals and a greater intensity comes up to the surface. The synths still play a heavy role throughout the song (and EP), but the acceleration of the music makes it feel more melodic death in tone than anything else. “Memento Mori” continues along this pathway, with triumphant synths guiding the heavier riffs (a la Wintersun), with a few moments of gentle melodies. But the closer “Black Northern Heart” brings things into full ballad-y mode. Not in that hokey sense, but more like a Viking lament than anything else. Lastly, while the production of the album is a bit soft overall, it isn’t a detriment to the music itself.

With only three tracks outside the intro, Longing for Clarity is more of a sampling than anything else. But it’s a good, quick blast of melodic/symphonic death metal if fans are looking for a new band to check out.