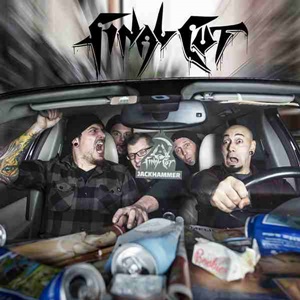 An apt title for the second full-length of Swiss quintet Final Cut – Jackhammer does its job in pulverizing the masses through a pounding blend of varied old school thrash influences from America and Europe. Forming in 2011, the band released their first album Massive Resurrection in 2014 independently, and sign with Art Gates Records for the follow-up. Gaining a new vocalist last year in Giulio Serratore, there’s also a unique bluesy aspect to many of these songs that truly make the band quite different from the norm – something that could allow them to stand out from the hordes.

Speed riffs and punishing tempos volley against some mid-tempo groovy transitions, while the vocals provide that acidic, demonic screams from the grave aspect to keep Final Cut more in the Kreator/The Haunted mold versus the commercial side of things. Neck breaking appears to be the order of the day when tackling the fierce pummeling nature to “Full Steam Ahead” or the under two-minute twisted mania of “Momentum” – the rhythm guitar action leveling the listener as the crazed finger antics take hold. The band use a blues harp/harmonica in instrumental sections as a second type of lead instrument – definitely an oddity, but works remarkably well to entertain and add a musical sharpness for “Creature” and the splendid “Generation Y”. Giulio employs a mix of screams and growls when delivering the lyrics, equally adept at switching up when necessary depending on the atmosphere and textures of the songs. There are times when Final Cut choose to sit in that mid-tempo marching mood (“Prejudice” sure to cause plenty of audience bumping should they choose to put this in their permanent setlist), alleviating any worries that this record is a pure ‘all speed’ outing.

Triplet strokes, slamming snare/double kick traits, and the need for attack put Final Cut in rarefied air for the genre – especially given the occasional blues harp/harmonica activities. By the time the closing instrumental “Picasso’s Thoughts” ends, many will probably go right back to the beginning and take this all in again. Those listeners who feel ear fatigue over the repurposing of Exodus/Testament riffs in the younger generation, this Swiss band could be the ticket for renewed faith in the current crop of thrash artists.