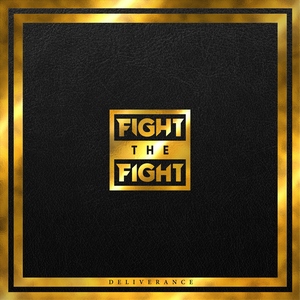 As metal continues to evolve and diversify itself, the crossover potential sometimes leaps off the page with the right combination of elements. Fight the Fight is a Norwegian act that manages to provide an intriguing mix of progressive metal, groove, and rock and roll elements into something that could easily appeal to a wide breadth of folks. Deliverance just needs the right push, as it demands your attention once it begins.

A thoroughly enjoyable mixture of some immediately hooky moments with more long-lasting instrumental prowess, Fight the Fight manage to satisfy both sides of the coin. Some of the hooky aggression present in the opening track has a Slipknot-esque feel (albeit a little heavier overall), but it’s also augmented by some fierce grooves in the chorus and lighter progressive elements that dig in more with future listens. “Triggerfinger” is almost funky in its grooves, and delivers a chorus that really latches onto a more metallic Red Hot Chili Peppers vibe and runs with it. It may be a strange description to some, but it’s entirely infectious – from the thumping bass lines to the playful riffs to Lars Vegas’ vocals. Later cut “Turbo Sex” also brings forward a more rock and roll based sound to the surface, as does the more melodic cut “Dying,” where Vegas is given more space to shine in spots with more subdued instrumentation. On the heavier side of things is “Pitbull,” which lives up to its name with some energetic and meaty riffs that lead into rolling grooves and a standout chorus. Lastly is the more atmospheric yet dosed in groove “Love,” which also uses more proggy influences in the riffing and effectively balances more ethereal moments with crunchy ones.

Fight the Fight have a lot of potential with their groovy mixture of both metal and hard rock. Deliverance works because the hooks are backed by interesting songwriting that consistently stays lavish in its use of energy and momentum. It may be a little off the beaten path, but worth a look to see if it’s up your alley.