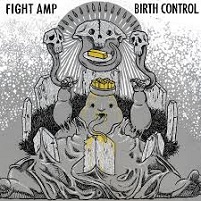 Before we address the fact that a stick of butter adorns the cover for Birth Control, it’s of note to mention that Fight Amp reminds yours truly of the numerous bands that used to inherit the same rehearsal studio as his old band. More often than not, we’d see a band like Fight Amp, decked out in flannel, husky beards, and a case of PBR on their shoulders, armed and ready for a noisy practice. Suitably, the goons in my band would snicker and contemplate how they were going to get a hold of said PBR, but once actual thinking became involved, they resorted to shaking the vending machine in the hallway to no end. Memories.

Fight Amp doesn’t do the beard/flannel ensemble like expected, but this trio from New Jersey stays directly in play of the Unsane/crust punk sound that’s presently all the rage. Birth Control is stripped down to its core, allowing soot-riddled riffs, blemished vocals, and loud, unsavory song melds to gain a small amount of footing. Problematic to the whole thing is how most of the album fails to latch onto to anything, which could be a direct result of Mike McGinnis’ simplistic riffing, yet the daunting “Should Have Worn Black” manages to reign in some dynamic points, as does the closing round of “I Am the Corpse,” which provides a much-needed venture outside of the band’s restrictive punk-on-metal box.

In spite of the noise and fury Fight Amp dredges up, the album cover for Birth Control overshadows the entire thing. Clearly, there’s some type of symbolism and/or metaphor going on, but we’re not at liberty to try and figure out what it all means. Instead, we’ll ponder a slab of butter melting on top of pancakes, which sound really good right now. Fight Amp? Not quite.