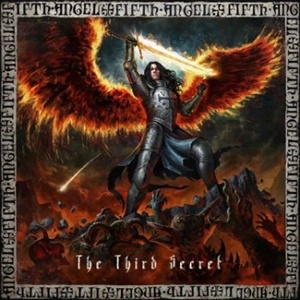 Swimming in an 80’s scene where bands craved a burgeoning thrash movement, Washington act Fifth Angel released two fine straightforward metal records in a self-titled debut and the Time Will Tell follow-up that have led to fervent appeal, especially in Europe where the band has performed a few reunion festival gigs. Naturally leery of stepping on that legacy, it’s taken 29 years to issue the third record, appropriately titled The Third Secret. Assembling four of the five key members from those 80’s days (vocalist Ted Pilot retiring from the scene after the band broke up in that period), the question on everyone’s mind would be if Fifth Angel could conjure up that creative spark again and issue another set of tracks that continued their fine melodic heavy metal with power philosophy. Gaining Nuclear Blast’s approval for this deal, it’s safe to say that old-timers and newbies equally will be pleased that these veterans return for all the right reasons, making time stand still in the process.

The crux of Fifth Angel’s style is about solid hooks and harmonies – guitar passages that rally the troops, choruses that command unison audience support, and supplementary musicianship highlights from all parties that appear in and out against the proper songwriting mechanics. The band always straddled that melodic hard rock and heavy/power metal line – one moment you could be thinking Dokken, the next moment Yngwie – beyond Maiden/Queensrÿche/Rainbow influences that most musicians in this specific age bracket have. That versatility allows a commercial effort like “We Will Rise” to sit side by side against a doom-like, Rainbow-edge number like “Queen of Thieves” where guitarist Kendall Bechtel pulling double duty now on vocals stretches his powerhouse pipes across Dio meets Ripper Owens landscapes – making you feel each ascent to the heavens and mid-range texture as well. Double bass driven affairs like “Stars Are Falling” and “Shame On You” allow the listener to remember that Fifth Angel can still fire up the pistons and go for broke when necessary, while “Can You Hear Me” is a stunning ballad that features complimentary electric/acoustic guitar action, an emotional verse to chorus transformation, plus fluid lead break work from Kendall and Ed Archer.

Favorites can change depending on the mood, day, time – that’s the best aspect of this record, the versatility of heavy metal on display from the title track to a more Riot-driven closer like “Hearts of Stone”. Fifth Angel do not have to worry at this point about fitting in to a specific trend with the current wide-open landscape of metal and the history they’ve already established. Hopefully The Third Secret will propel a second revival and make the fourth record even more of a blockbuster, as it’s hard to imagine the band resting on their laurels.