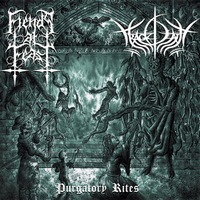 Fans of blackened death metal rejoice! Purgatory Rites brings together two swell American bands that are fast emerging to be experts in the subject. Fiends at Feast bring their black/death hybrid by way of California, while Tragic Death bring their “apocalyptic” metal from Wisconsin. Both of which have previously served up a full-length in the past, but this split seems ready to give both bands a wider birth in the future.

First up is Fiends at Feast, who come across more directly as a pretty straightforward blackened death metal band. Frequently blasting forwards at full speed with powerful deathened roars, they do see fit to slow things down occasionally, as well as provide some more clean playing in the instrumental “Spectral Passageway.” The melodies stick nicely, aided by a production that allows just enough grit while maintaining clarity (kudos on the audible bass presence). At three songs and an instrumental, there is a certain closure brought forth by their final, more epic sounding track, “Into the Darkness,” that makes the listener wish the band has tossed on a few more tracks in between.

Finishing out the split is Tragic Death, which adds more of an older Swedish approach to their blackened death metal approach. A bit more melodic than their opening brothers, Tragic Death also marches ahead through three somewhat lengthier tracks. They accomplish this through some atmospheric moments that are sprinkled in at just the right moments. The melodies and riffing are top notch, with the careful balance of dynamics holding things together. There is a definite appeal here for fans of Amon Amarth and Dissection.

While offering up different stylistic approaches to the broad category of blackened death metal, Purgatory Rites showcases how solid the sometimes stale and overdone genre can be. Whether your entry point is through melody (Tragic Death) or brutality (Fiends at Feast), know that you’re destined to find both sides appealing here as you complete the disc. An excellent use of the split format.