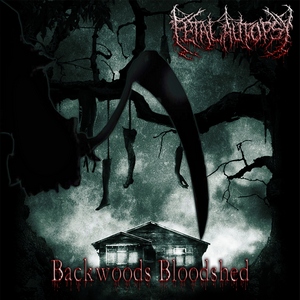 Those who tend to favor the genre will know what to expect from Backwoods Bloodshed. Low and powerful vocals, plenty of groove (some of which qualifies as slam), and some subtle melodies that never lessen the bludgeoning. “Necrotic Fornication” seems like brutal death metal incarnate, as does the opening sampling to “Left to Rot.” And there’s nothing wrong with that approach. But that is also exactly the moment that you’ll realize that Fetal Autopsy have more to offer than simply brutal death metal. A creepy atmosphere (enhanced by some synths and doomy riffing) and even a few clean female vocals add to the flavor and keep the 6.5-minute track feeling fresh throughout. “Butchered in a Casket” uses some gruff near-spoken words to change direction a bit as well. Closer “Screams of Decaying Soul” also offers some melancholic vibes and grim atmosphere to close things out. The bottom line is don’t assume that just because it first looks like simply brutal death metal, it doesn’t have anything else to offer.

Brutal grooves and slams, complimented by some eerie atmosphere gives Fetal Autopsy a slight edge over their more slam-focused peers. An effective twist that allows it to be more interesting and developed than you might think it initially.