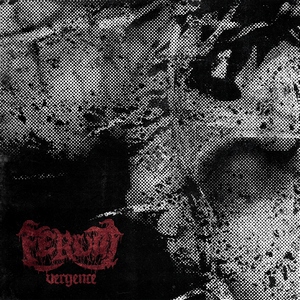 Usually when one tends to think about death/doom bands, there’s more of a funeral processional vibe to them. Some death metal intensity stands out, but the lurching doom sticks out at the forefront. The opposite feeling holds true for Ferum’s debut EP, where filthy death metal vibes are just as much at play as doomy marches.

Seemingly equal parts old school death metal worship (think Autopsy) with slow crawls of doom, Vergence hits a different sort of sweet spot. While either of the two pieces don’t really offer anything that’s overly fresh, the way that they have worked these two parts into something else is what makes it worth checking out. The guitar tone is absolutely filthy, and Samantha’s vocals have that rotten, older feel to them that works like a charm. Above all else, the grimy death metal components give Ferum something to latch onto, which leaves the listener with more bite to the doom than what is usually predicted. The slower passages have more weight to them, and coupled with the band’s sound, gives them a greater intensity. The band’s influences become apparent by the fourth track, a cover of Cyanide’s “Funeral,” in which said intensity works in creating a track that’s even more massive than the original in tone. Leaving the album in a pleasant turn of events, the ‘outro’ track isn’t of the typical variety, but a closer that delivers just as much of a potent death/doom trip as the tracks that precede it.

Ferum offers up some ‘90s death metal grittiness into their doomy format with ease on Vergence. While there’s plenty of homage to those days, it doesn’t stop the band from finding some footing of their own as well, providing a springboard for some hopefully even stronger future material.