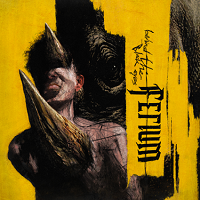 Inasmuch as the Israeli metal scene has yet to develop its sound, it does have one thing going for itself: There’s a nice spread of new(er) bands to follow up what Orphaned Land and Melechesh have been doing. One such band is Ferium, who were last heard from via their 2014 effort Reflections. If Orphaned Land and Melechesh are to represent the country’s exotic side, then Ferium, along with the most-excellent Hammercult embody the Israeli metal’s hardened, aggressive core. On Behind the Black Eyes, Ferium demonstrate such aggression, but not much more.

Not quite deathcore or metalcore, Ferium’s sound and/or approach is built upon chunky, groove-laden riffs. Frankly, they’re almost the Middle Eastern version of Pissing Razors (remember them?). The occasional instrumental drop-out happens to lend dynamics (see: “A Journey We Had”), but for the most part, it’s a conglomerate of deep-rooted chunk-and-balls riffs with partial bouts of extremity. Vocalist Tiran Ezra suffers from the same malady some of his better-known contemporaries do: He never quite knows when to back off and let the music do the work. When the band breaks into a sanguine groove or mosh part, like on the staccato “Well Fell Apart, We Fell Together,” here’s Ezra jumping over top of the song. He’s no slouch in the gurgled growl department, but sometimes it’s okay to sit a few riffs out.

Beyond that, Behind the Black Eyes does maintain a sense of professional decorum. The production is top-notch, and having artwork from Eliran Kantor of Testament and Atheist fame can’t hurt matters either. The next generation of stellar Israeli metal is around the corner…you’d think Ferium are capable of joining the crowd at some point.