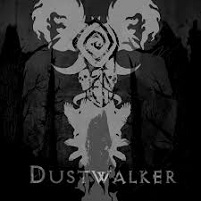 If our corpse-painted Norwegian buddies aren’t hiding behind trees, they should be now. In what is arguably the most interesting movement black metal has seen in recent memory (sorry, North American “Cascadian black metal”), the United Kingdom BM cadre continues to make impressive strides, spurred by the likes of Winterfylleth, Wodensthrone, and Fen, who could very well be the best of the bunch. On their third album Dustwalker, the trio have created what is essentially, a must have stroke of full-bodied, folk-inspired melancholic black metal. Pardon the elongated tag…

Previous outings from Fen (who are comprised of bassist/vocalist Grungyn, singer/guitarist The Watcher, and drummer Derwydd) were hit-or-miss, most notably their 2009 The Malediction Fields debut, which we gave high marks to. The right idea was there; to capture wistful folk metal elements with stringent black metal and NOT sound like Agalloch, yet the trio fell into the same trap a lot of fledging bands do: they didn’t know how to capitalize upon their ideas.Dustwalker does a distinct 180, with the album’s seven songs brimming with forlorn passages, acoustic smatterings, and per the norm, fiery builds.

The album starts with the can’t-miss chord clanking of “Consequence,” where upon dissonance collides with melody. The clean vocal coating provided here, and on “Hands of Dust” are superiorly lush, especially on the spatial moments of “Hands of Dust,” where one can picture a roaring campfire, amidst the northern sky. “Spectre” emerges as the album’s pinnacle moment, an all-acoustic exercise that summons vintage Glimour-era Pink Floyd, all the while staying in the bread basket of harmony and key. The Voivod nods on “Wolf Sun” are splendid, while the whirling riffs and combustive elements that comprise of album closer “Walking the Crowpath” are truly transcendental.

A body of work that surpasses Winterfylleth’s glorious The Threnody of Triumphfrom last year, Dustwalker should emerge as British black metal’s foundational album. Not only does it successfully dip its toes into familiar waters, it keeps an eye on progression, not forsaking melody, or opaque bleakness that comes from being a band that hails from the UK’s marshlands.