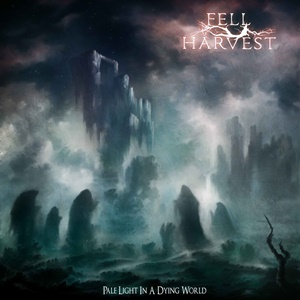 COVID-19 certainly has thrown its share of curveballs into millions of lives. For doom metal outfit Fell Harvest, vocalist/bassist Joseph Fell suffered lung damage from contracting the virus – forcing him to change up his death/blackened voice into a more clean, palatable delivery on this album Pale Light in a Dying World. This Wyoming trio have been together under this moniker since 2019 but were previously together early in the 2010’s with the doom/death unit Thorns of Acanthus who released an EP The Ash in My Hands Will Salt My Wounds in 2014. You can expect a heavy combination of crushing doom with extreme musical accents – liberally genre hopping from domestic and European influences into a sound that is quite hypnotic, not an easy feat in today’s marketplace.

Large layers of acoustic/electric instrumentation from guitarist Liam Duncan pull from progressive, doom, and death angles – the type that people remember from early Paradise Lost, My Dying Bride, or Novembers Doom. Check out the measured chords and subtle, driving transitions for “The Lark at Morning”, allowing drummer Angel Enkeli to elevate the arrangement through some potent, punchy fills (occasionally reaching blast proportions) against the naturally mid-tempo groove template. Joseph does his best to convey the sorrow, despair, and magnitude of his words in a lower, contemplative register – employing a semi-talk / lower register that will convince most that the matchup to the music works. Especially in songs with natural acoustic supplementation, such as “The Wind That Shakes the Barley” where the switch off to heavier rhythms/harmonies gives off a bit more of a progressive Opeth vibe. The group are well-equipped in shifting between shorter arrangements and sprawling, expansive outings – as half the tracks sit between that seven to nine-minute plus mark. Even in those longer songs, there’s a sense of anticipation building and organic growth in subtle bass licks or atmospheric switches to keep “The Ghosts of Scapa Flow” as well as the title track interesting and never burdensome to process.

Seasoned musicians in multiple genres but keeping their doom base on point, Fell Harvest are another three-piece that prove America has plenty left in the tank to offer creatively when you think everything has already been accomplished. Sadness and sorrow never sounded so sweet.