Feel No Pain – Into the Chaos (Self-Released) 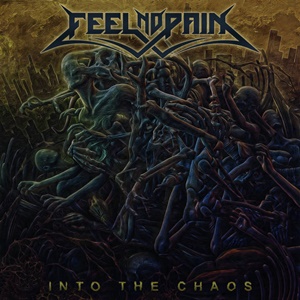 Using my bilingual abilities to wrap my head around their bio, Spanish metal quartet Feel No Pain began in 2006, although it took many years to develop the songs and style – really ramping things up since 2014. They issued their First God of the Earth demo in 2016, added a new rhythm section the following year, and we arrive at the follow up EP Into the Chaos. This release contains three songs and a short intro that probably place the band in a groovy, thrash metal platform – but also contain a bit of melodic death and extreme elements that could help these musicians gain broader appeal from the underground hordes.

The guitar play can move from straightforward power riffs with extreme accents into something twin axe magical – all within the same song as “Vanished Man from the Promised Land” exemplifies. It’s as if in one instance you are taking in Voivod scattershot action, then Dissection, or the 80’s Metallica sweet spot when the Hetfield/Hammett team hammered home those harmonies. The racing tempo for “Into the Chaos Dimension” proves to be another adrenaline-fueled effort, the hyper speed vocals keeping in time, while the death roars when the arrangement briefly shifts gears provide that brutal reprieve before the next melodic guitar line and instrumental hook grabs your attention. Feel No Pain always go for that melodic death/power harmony combination which put Blind Guardian to the top of the heap – even when the rhythm section could be going in a groove or blasting direction. Properly adding alternate sonic narrative parts from whispering voices to didgeridoo accents against bird/animal calls as a snare passage builds and builds allows for that surprise element to open minds even in this shortened playback space at 16 minutes and change.

If something could be improved, it would be the vocal presence – there are times when taking in these songs that you feel like the hurried, blitzkrieg delivery could be a tad clearer if the band took their time in that department. Overall though, Into the Chaos succeeds because of its amalgamation of power and extreme elements into a solid, groovy thrash template – and there are plenty of people who need Feel No Pain in their aural diet daily.