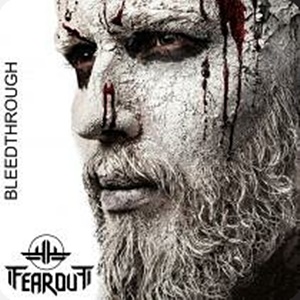 Well-respected for its influx of hard rock/metal musicians, we have another Finnish act to delve deep into for the debut album Bleedthrough of Fearout from Helsinki. Pouring through the recording multiple times to get proper final results, the four-piece deliver a sound that infuses a mix of stoner, punk, and metal influences – ensuring the twelve-song outing has plenty of dynamic diversity amidst its straight-ahead, three chord (or slightly more) approach. Expect a melancholic, alternative-oriented vocal delivery that along with addictive riffs and a pounding/groove-oriented rhythm section sprouts many melodic moments, including a few earworms that reflect back on the band’s obvious affinity for a few of their domestic brethren that broke through on an international scale.

Employing everything from occasional piano-strains, disco-like drum nuances, to four-part vocal harmonies that will diversify the normal electric proceedings, there’s a lot to unpack as far as the band’s interest in stoner metal, punk, and hard rock/alternative elements. The clean to stairstep guitar transitions Arg Kinnunen manufactures during “Which One of You” add a reflective atmosphere and impact the emotional depth of the vocal harmonies during the chorus between bassist Minttu Minkkinen and vocalist Justus Latvala. The opener “That Was the Day I Decided to Start Using Hard Drugs” contains the punk drive and stoner angst necessary to jump start the record – imagine a fusion of Pennywise and Mustasch here between the pissed-off vocals and up-tempo musical backing. Smartly placing “Smokescreen” midway through gives the record that second adrenaline uplift, while when choosing to take the pace down a touch and lay into those stoner riffs, there’s nothing better than the layers of clean/distortion interplay weaving a sonic tapestry around the desperation soaking through Justus’ main verses for “Half-Empty Man”. As mentioned earlier, you can get a sense of Sentenced and HIM factoring into various melodies, hooks, and songwriting ethics – as well as American stoner and punk angles that allow Fearout to not be stuck in one prototypical box. You’ll even get a bit of “Hangar 18”/Megadeth edge to specific riffs for “Point Blank Range”, the verses a little calmer than the crunchy/catchy guitars that cascade over the chorus.

Bleedthrough should allow the band to grow at their own pace, as well as place them on various bills when gaining a following on the live front. The possibilities for a lengthy career are waiting to blossom.