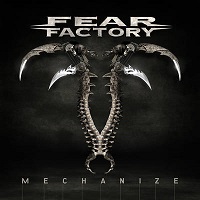 It’s hard to believe Mechanize is going to see the light of day considering the ridiculous legal wrangling over the Fear Factory name that has taken place the last 10 months. All of this is irrelevant now, as Mechanize pastes the last two Dino Cazares-less FF efforts, Arkaea’s wimpy Years In the Darkness and Divine Heresy’s too heavy for its own good Bringer of Plagues. That sure is a lot of competition

. And a huge freakin’ mess.

For starters, Mechanize benefits from Cazares’ emphasis on pulsating guitar

like “Fear Campaign,” “”Powershifter” (which could easily be a Divine Heresy song) and “Controlled Demolition” right in the crosshairs of some of FF’s best work to date. In terms of sheer brutality, Cazares does his best to match his Divine Heresy output with “Powershifter” or “Oxidizer,” the only difference being these songs have Burton C. Bell and the DH songs don’t.

Kudos here to Bell, who sounds inspired and brash throughout this 10-song effort. There are some big, BIG choruses here, namely “Fear Campaign,” the melodic “Designing the Enemy” and album closer “Final Exit,” which is the longest FF song

put to tape. When given muscular material in which to sing over, the man takes on the role of Good Cop vs. Bad Cop elder statesmen, ultimately putting Mechanize over the top.

Certainly in league with Demanfacture and Obsolete, Mechanize may reek of a traditional reunion, “let’s please the fans” type of album, but the proof is in the band’s well-worn formula and unfuckablewith songs. The real test will be if Fear Factory can maintain this momentum, or fall by the wayside and bring us another Digimortal. For now, it’s all smiles in the FF camp.