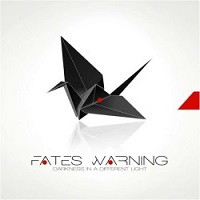 Nine years removed from their last studio effort (2004’s FWX), and Fates Warning remains on the tip of progressive metal tongues. The 2011 Arch/Matheos album was the next best thing to an actual record for the band, for it rejuvenated those fond, fluffy feelings for Awaken the Guardian, perhaps even tipping the scales in favor of a full-fledged Arch re-entry into the fold. But main Fates Warning man Jim Matheos has stuck firm with Ray Alder as singer, and Darkness in a Different Light carries on the band’s penchant for thought-provoking, pensive prog metal.

Drummer Bobby Jarzombek (Halford, Riot) makes his recording debut, figuring to offset the sometimes too-fancy playing of his predecessor, Mark Zonder. His impact is instant – the double-bass patterns on “Thousand” are about as extreme as Fates Warning will get, but for the most part, Jarzombek is a cool pocket player, letting the smooth drawl of Adler muck it up. And there’s lots of memorable vocal happenings from Adler, like the chorus on “Firefly” (an album highlight), the moody “Falling,” as well as the Kevin Moore-penned “O Chloroform,” a song that could only come from the mind of one of progressive music’s most unconventional thinkers.

Across Darkness in a Different Light, Fates Warning opens things up, at least in terms of when we’re engaged with anything beyond the cherished Parallels album and up. This is a dark album, maybe the most dark since the underrated A Pleasant Shade of Grey, and with Adler’s potent (and soaring) vocal lines being the bell cow, Darkness in a Different Light settles in comfortably with a catalog that has two stunning gems (Awaken the Guardian and Parallels) and several strong albums that most folks (DR included) overlook when they shouldn’t.