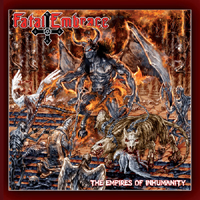 A reach by anyone’s low standards, Germany’s Fatal Embrace may embody the raw feeling of mid-80’s thrash, but that doesn’t account for a sloppy, rather unmemorable display of Euro thrash metal. The fourth album from a band who has made nary a whisper in the thrash metal scene, The Empires of Inhumanity comes across as one of those hastily thrown together albums that is thrash for just the sake of being thrash. You know, it’s like pretty much the entire retro-thrash movement.

Right down to the production of this thing, one can quickly guess where Fatal Embrace is trying to go. A raw production is well and good, but when you don’t have the songs and wares to back it up, you’re in trouble. There’s loads and loads of Destruction aping going on here, except for the band doesn’t have a Mike Sifringer and Schimer in its ranks. Instead, the drumming is nearly off-time, every time and riffs leave little to the imagination. Sure, metronomes are so not true thrash, man, but the hurried time-keeping is quite noticeable on opening cut “Wake the Dead” and throughout the rest of the album.

From there, we’re treated to every thrash cliché in the book, from “Into Your Face” (shouldn’t that be In Your Face?”) which is an Exodus-like clunker, to “Rapture For Disaster,” a song that starts out promisingly enough, only to descend into a mess of ill-placed riffs and gang vocals. It’s all just so sloppy, and the band’s cover of Iron Maiden’s “Killers” is unforgiveable.

Thinking that thrash fans are easily lulled into liking anything pertaining to thrash, the decision to release The Empires of Inhumanity comes as a surprise from Metal Blade. The voluminous amount of releases the label puts out a year usually serve some purpose, but this is about as meaningless and genre-clogging as you can get. Now, where’s that copy of Mad Butcher? 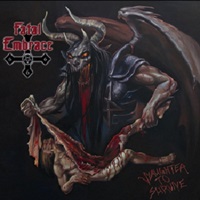