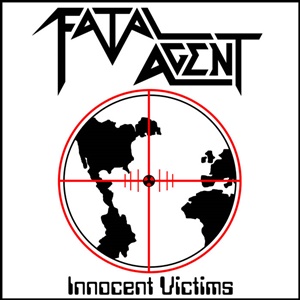 Zeroing in a specific era of energetic thrash from the late 80’s and writing new material cut from that cloth, Fatal Agent call Pennsylvania home and recently released their third demo with Innocent Victims. Considering the age of each musician in the band is sixteen, there’s a certain youthful exuberance to be admired in going for the gusto in a certain niche that may not have broken ‘big time’ commercially but still has its pockets of admirers. After a few spins of this six-song release, it’s obvious that speed is the name of game – along with a boatload of gang-oriented shouting and rhythmic vocals to bring listeners back to a period where Nuclear Assault, Atrophy, and Sacrifice garnered major attention in the underground fanzine / tape trading network.

The three-piece use the key words of the period – ‘nuclear annihilation’ in opener “Global Genocide” or circular up and down fret motions between the stop/start riff segments during the title track to keep heads bobbing as the relentless speed floods the airspace. Lead breaks are shared between all three members (including some cool shredding from bassist Nick Tinelli on a couple of songs), and the main vocals from guitarist Caleb Warren possess that direct cackle that often goes hand in hand with the verses – it’s a wonder he doesn’t sprain his tongue with the word spew he delivers. The occasional deliberately drawn out nature of certain words (the chorus of “Televised Nightmare” a clear example) makes that section a little awkward, as it could have worked so much smoother with different phrasing – adhering to their 1987-1990 influences. Most of the songs rarely approach four-minutes, ensuring a quick fix, get in and get to the next track outlook. The programmed drumming lacks a little variation, and hopefully will be rectified with a proper human manning the skins on the next outing – as some of the fills are quite comical (“Deceptive Reality” a victim of this).

In the end, Innocent Victims differs from the Exodus/Testament brigade of bands into something more like early Sacrifice, Nuclear Assault, and Atrophy. Take that for what you will – it’s entertaining, but probably for a select thrash audience.