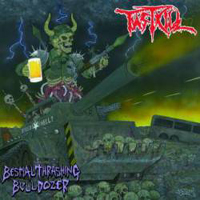 Recording demos since 1996, Japanese thrash act Fastkill do not subscribe to the commercial side of things on this third album Bestial Thrashing Bulldozer. Ten songs in a quick 30-minute outpouring that doesn’t relent in terms of speed, aggression, finesse, or ferocity, as this quintet remind me of the mid-to-late 80’s acts who took the movement to the underground.

Songs such as “Guillotine Attack” and “Die in the Pentagram” just go for the jugular and never stop pummeling all your senses, much like Bloodfeast, Razor, or Devastation. Vocalist Toshi has hyper-kinetic word propensity, just delivering at dog whistle, screaming range, as if John Connelly from Nuclear Assault is gargling sandpaper and sending his voice through a torture chamber. Jiro and Aki as guitarists must be enduring wrist pain from their furious picking approach, and the solos within “In Thrash We Trust” and “Endless Game” feature the thousand note thundercloud movements we’ve come to know and cherish from Slayer.

I’ll admit a cursory eyebrow moved up and down on certain songs, but at other times this scattershot, bumblebee riffing didn’t really showcase any separation from track to track. Production-wise, it’s a minimalistic affair as well – the rhythm department gets mostly snare, bass, and very little else as the guitars and vocals gain the lion’s share of the sound.

Fastkill lives up to its moniker on this release. Those who want punishing, all out insanity from their thrash should seek this out, as there’s no seeking out the mainstream with Bestial Thrashing Bulldozer.