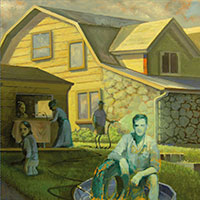 debut album Portrait is supposedly about a dysfunctional family that develops supernatural powers. So, it’s like Disney’s The Incredibles, right? The Incredibles was after all, one of Pixar’s better films over the last decade, depicting a suburban family with a patriarch itching to get back into the crime-fighting business while his family grapples with their own super powers. It’s quality, family-fun viewing, with fantastic visuals, great plot twists, and the sterling voice of Craig T. Nielson to boot. Next time ABC Family has it on, do yourself a favor and check it out. (Important note: Wall-E is still the best Pixar film.)

While Blistering remains unsure if Portrait is parallel to The Incredibles, we are sure that it misses the mark when it comes to the Mastodon-clone field, which Family is close to fully occupying. The Brooklyn-based quartet have much more grit and anger than Mastodon, yet their riffs are nowhere near as fluent and interesting, causing rather noticeable limitations in the band’s compositions. A lot of these songs never quite get off the ground; mired in the sort of dull riff exchange that saddles bands that don’t rely on

having dynamics or spacing in their songs. And when you have to trudge through the album’s eight songs with the sole purpose of plucking out anything of substance, it’s the proverbial needle in the haystack calamity.

Brooklyn hasn’t quite become the same insufferable, overrated lot as Chicago, but given the recent output from Hull, Primitive Weapons, and now Family, we’re starting to wonder if the borough lost its value

once Type O Negative took an unfortunate bow. Portrait is unremarkable as it is generic. Shame…that’s some awesome cover artwork.