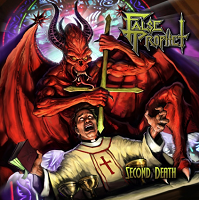 Metal bands think they have it rough now, try getting established in Greensboro, NC in the 80’s. That’s Nascar/Merle Haggard country, not metal.  All sorts of visions start to float when thinking about that point in time and locale: Half-empty bars with scraggly old dudes serving as the audience, bible-thumpers leaving bibles at the venue, and the classic disapproving eyebrow raise from the moral majority. Those were (probably) the type of things False Prophet were up against, but they managed to one full-length in the form of 1991’s Second Death, which is getting the reissue treatment.

The band’s thrash/sorta Euro/sorta NY style was slowly on its way out by the time Second Death was released. And even though thrash was starting to refine itself and eventually run out of ideas, False Prophet demonstrate no shortage of the lot, with a pair of cuts (“Second Death” and “In Satan’s Name”) stretching past the ten-minute mark. And to think, these gents more than likely had to play each of these songs all the way through. Anyway, False Prophet comes across like a more refined Possessed with better production, which is aided here by a remix courtesy of Jamie King (Between the Buried and Me). “Holy Deception” emerges as the pick of the litter (love that hyper main riff/drum roll combo), with the Venom-inspired “Bring Back a Memory” not far behind.

Also included is the band’s 1989 Sign of the Cross demo, and Murder of Mercy Live 1990 effort, which shows just how far live recordings have come. Nevertheless, False Prophet are a nice find courtesy of Heaven and Hell Records, a band who more than likely because of their geographic situation, never got the label attention they deserved.