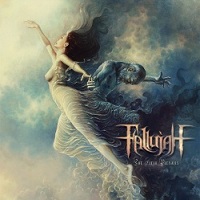 Fallujah successfully knocked the metal community on their collective rears with the release of the Nomadic EP last year. Fully embracing the atmospheric approach they flirted with on The Harvest Wombs, it was a breath of fresh air from the often repetitive and uninspired death metal legions. With the announcement of The Flesh Prevails (along with the subsequent release of “Sapphire” and “Carved From Stone”), the question on most in-the-know metalheads’ minds is, “can Fallujah can pull off a full-length effort with the same ingenuity and creativity they exhibited on Nomadic?”

The answer, of course, is a resounding yes. The Flesh Prevails is a modern spectacle of atmospheric death metal. Not afraid to take risks, this album will be somewhat fulfilling initially but the true gratification will sink in once you spend enough time with the disc to see the album not as a collection of “songs” but movements within a fluid symphony. Moments ebb and flow between heavy-hitting death metal (“Carved From Stone,” “Levitation”) and more progressive and esoteric segments (“Allure,” “The Flesh Prevails”) seamlessly fused with master craftsmanship. There is even time for some haunting, more electronically driven material on “Alone With You,” which contains only some ethereal female vocals.

The Flesh Prevails never takes the easy way out, instead designing a journey meant to challenge the listener. The further you venture into the album, the more nuances appear to entice you to continue forward and listen again. Whether it’s a well-placed growl (vocals do begin to take a backseat in the latter half of the album), a subtle yet euphoric solo, or some trippy atmosphere, listening to different components throughout a single playthrough yields some powerful observations. It’s also a testament to how well thought-out these songs are.