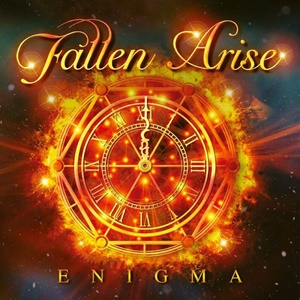 Formed in 2009 by keyboardist Gus Dibelas, Fallen Arise is a Greek act fusing together elements of symphonic and gothic metal. Recording their first EP Eternal in 2012, they signed to Noisehead Records for their debut full-length Ethereal before Rock of Angels Records signed them for the follow-up Adeline in 2015. Changes are afoot in the main lineup of this sextet, gaining a new female vocalist in Fiona Creaby, guitarist Spyros Vasilaskis, and bassist Jason Ioakeim while seeing the return of Vlassis K. on male vocals. The multi-studio approach for recording, mixing and mastering doesn’t hamper the final output – as it seems the band keeps their focus on creating hook-oriented songs that feature pop melodies along with occasional growls that keep things catchy while also gothic and symphonic.

Diversity is a strong suit of the ten tracks of Enigma – the robust orchestration flourishes and mid-tempo nature to the title track assuredly familiar to those in the Nightwish or Epica camps – but there are also distinct mannerisms in specific vocal melodies of Fiona and calmer musical phrasing that brings up Evanescence when you take in “Forsaken”. Acoustic touches with nature effects make “Horizon” a calm ballad, allowing Fiona to stretch her upper register, while the orchestration along with a spirited lead break from Spyros takes the epic “Forever Winter” into heavier terrain, Vlassis adding the necessary beast growls to contrast the clean melodies. Gus as a keyboardist knows when to go for the lighter, 80’s-like hook that allows the guitars and darker vocals to gain that necessary impact as “Embers” is a midway album highlight. If there was one area that could have been a little stronger, it would have been the snare tone for MariosK. – he’s a solid threat behind the kit and can be quite groove-oriented at times, but you just wish there was a touch more snap and bite to that snare to inject even more vitality to these tracks. And it’s nice to hear some 90’s Paradise Lost aspects to “Released” in terms of the rhythm guitar and keyboard supplementation to know that era of gothic metal is not fading into the wind.

Fallen Arise has promise and potential because of the obvious talent and songwriting dynamics that take place over the course of Enigma. It comes down to separating from the influences and putting their own stamp on things, which could be on the horizon.