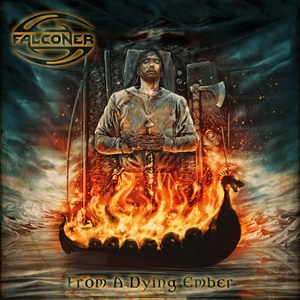 Probably wasn’t a surprise that once Falconer retired from the stage with their ProgPower USA appearance in September 2015 that the inevitable studio demise would be forthcoming. Wanting to go out on the best foot possible, From a Dying Ember is the ninth studio record, their first in six years and evident through multiple playbacks that the five-piece push their folk-inspired power metal songs to the highest level possible in terms of quality. Because why bother releasing a final effort if it isn’t one where you put every ounce of heart, soul, and passion into your art, right?

What has always stood out within the band is the unique qualities of the performances, the songwriting, and setting the table so to speak for those best efforts to shine. Mathias Blad as a trained theatrical singer has a dramatic, rich baritone delivery that stands heads and shoulders above most metal singers who creak or struggle to sustain falsettos and screams with conviction. Guitarists Stefan Weinerhall and Jimmy Hedlund lay down culturally-rich rhythms of a Celtic/folk nature – infusing their playing with power, precision, and nuances from their past melodic death/Viking/black histories to create undeniable earworms. Add in the thunderous/adventurous rhythm section of bassist Magnus Linhardt and drummer Karsten Larsson and you have the makings of a veteran act who love exploring their benchmark style with fervor, aiming for achieving the best songs possible for long-term retention.

If you want straight ahead power outings, “Desert Dreams” and “In Regal Attire” check off those boxes. When the band wants to rear back into their Swedish-language folk-driven material, “Bland sump och dy” fits the bill with a slightly slower, almost ‘uplifting’ doom theme. Keyed fiddle and bagpipes make “Garnets and a Gilded Rose” another mid-album standout, their features enticing against the nuanced lead breaks, while the quieter “Rejoice the Adorned” showcases the magnificence and deep resonance of Mathias as he dances effortlessly around the majestic melodies. By the time the 6:37 closer “Rapture” finishes with its folk/power crescendo combination, many may shed a tear at the fact that we will have no new Falconer material to anticipate, ever. And that’s okay – as Falconer have produced a fitting ending that rivals this scribe’s favorite effort Northwind.

These musicians will probably continue to write and perform in other bands – but there will never be another Falconer, so cherish the records and let them consume you for a lifetime.