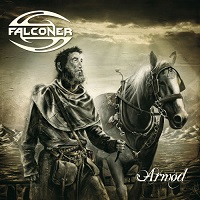 Falconer has always been an interesting listen. They’ve never been quite like other power metal bands

, and for the most part, have been a quality and different offering. Their folk-inspired tunes have always been a departure from others, which in turn has made Falconer that much more of a unique addition to this genre. They’ve taken their folk elements further than ever, however, with their latest release, Armod.

First off, the entire album is sung in Swedish – fitting in naturally with the heavy influence of Swedish folklore. The album draws from folk metal more so than it does from Falconer’s usual power metal attack, going back to mainsongwriter

Stefan Weinerhall’s old band Mithotyn in comparison. However,Armod is still very much a Falconer album, with plenty of speedy riffs and over the top goodness – they’re just more spread out than one would expect. This fact isn’t a negative from this writer’s perspective, as their style here is most enjoyable. However, more some could be off put a tad, seeing as Armod is a bit of a departure from what one expects from this band. Those remaining typical Falconer moments are splashed together with much folk, and in many instances, a good number of the tracks are significantly heavier than usual. It’s a very unique offering from these guys, and it’s a very welcome and well-done derivation from the last couple of releases.

The album begins with a blazer titled “Svarta Änkan,” which is loaded to the brim with fierce and heavy guitars and speedy drum work. All is topped off with Mathias Blad’s strong, melodic vocals that all Falconer fans have become accustomed with. His tonality adds another dimension to this song

– and the entire album – adding positively to the one of a kind sound this band has defined. There are also some more mid paced numbers like “Dimmornas Drottning,” which boast some especially fine leads, as well as some soothing acoustic dominated tracks like “O, Tysta Ensamhet.” Every song is unique and has it’s own pacing, which the instrumental variation is extraordinary.

Production on Armod is of the very clean variety, which has always suited their music well. Some may argue that they can be a tad too clean, but a grainer sound would no doubt be a detriment to the bountiful layers of different sounds and traditional instruments that Falconer have effectively used throughout.

As can be easily told, this isn’t your traditional Falconer release. Some power metal fans may think this is too much of a departure from the band’s usual fare and prefer the more high intensity sides of the band that aren’t as abundant. On the other hand, some folk metal fans may not get past the very clean and somber vocals, as well as some of the over the top bits. However, to those with varied taste and an open mind, Falconer have made a wonderful release inArmod that results in an eclectic mix of soaring power metal, complex folk styling and very unique songwriting with a prevalent traditional Swedish vibe. Definitely worth at least giving it a try, for this may surprise in many positive ways.