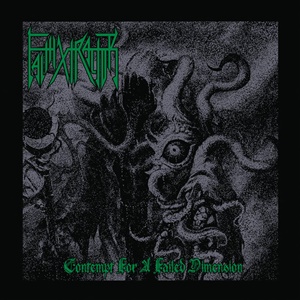 The brainchild of Ash Thomas, a Cincinnati, Ohio musician who also plays in acts like Crucified Mortals, Shed the Skin, and Surgikill to name a few, Faithxtractor as a duo unleashes a OSDM sound with this fourth full-length Contempt for a Failed Dimension. Joining Ash is bassist Zdenka Prado, who works with Ash in Estuary and Surgikill. You’ll hear six original songs (plus a bonus Sepultura cover on the CD/vinyl versions) of vicious riffs, dark growls, punishing tempos, plus this symbiotic relationship of US/European influences that present a myriad of textures that harken back to the origins of the movement during the 1990’s.

After a subtle, ominous horror-like 26 second intro, the quick hitting riffs and speedy tempo of “Vomiting Proclamation” hits high gear – only to mutate into this European death-oriented transition that sits against some twisted latter day Death chord movements. The shifting nature of this shorter 2:46 cut that ends in a fade out makes the follow-up “Life Abnegation” that much more intense – Ash summoning his deep bellow from the grave while the intense doom to death groove parts captivate in that classic Asphyx meets Entombed next to natural American energy with a slightly frantic/off the rails lead break. The diverse nature to these songs in terms of tempo versatility and outside progressive/left-field chord changes allow Faithxtractor to be distinctive, Ash excelling at killer cymbal/snare/kick fluctuation that holds your attention. The main sequences for “Revenge Void Asphyxia” a prime example that moves from doom to blasting execution over the course of this six-minute arrangement. Those fortunate enough to purchase a physical edition get an early Morbid Visions-era Sepultura cover for “Empire of the Damned” – embracing this classic with raw abandon, Ash’s screams summoning the deepest demons in hell.

Ardent followers of OSDM will dig Faithxtractor – who have a bit more intuitive creative angst in the tank for Contempt for a Failed Dimension. It’s crisp assault on all fronts will obliterate with intent to appease the underground hordes.