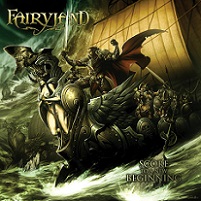 Fairyland, who without question have the worst name in all of power metal, won’t strike fear into anyone in the near future, but Score To A New Beginning has some legs to it. And since there are no new revelations in power metal (Lost Horizon was the last great, white, poorly-costumed hope), albums as well-constructed as this will always rank high in these parts.

Now consisting of one multi-instrumentalist/songwriter Phillipe Giordana, the band (or one man project) utilizes a revolving cast of vocalists to great effect. Marco Sandron of Pathosray handles the bulk of the duties, while Tony Kakko sound-alike Georg Neuhauser of Serenity does significant spot, giving Score… a thematic slant that might not had been achieved with just one singer.

Naturally, there’s little in terms of variety here; just Euro fluff, keyboard overload, maxed-out double-bass portions, and vocal pyro, yet there’s a handful of songs here that are near-worldbeaters. Case in point, “Assault On the Shore,” which opens with a fluid guitar/keyboard melody then drops into 70’s prog territory or “Master of the Waves” which is perhaps the best song Kamelot hasn’t written the past decade. “Godsent” and “Score To A New Beginning” also rank as top-notch, instantly memorable numbers.

Score To A New Beginning proves that for once, not deviating from the course nets results. Nothing heard on these 10 songs haven’t been beaten to death by every other Euro power metal band, but Giordana must have caught fire during the songwriting process, as this album has proven to be one of the few weighty, go-to power metal albums of 2009. Well done.