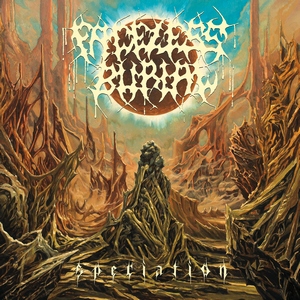 Faceless Burial are an Australian death metal act whose first full-length, 2017’s Grotesque Miscreant, set them on the international map. Three years later, Speciation comes in as their latest effort and keeps the old school death metal spirit alive even as the band stretches their songs and style out a bit.

There’s quite a bit to digest with Speciation, which is a good thing. While the music has that ‘old school’ vibe, one could also it’s more of a timeless one than a sound that ends up being relegated to one of the usual geographic locales. It’s thick and filthy in tone, with vocals that bellow with just as much grit as the music itself. It’s an ugly sound, but one that’s perfectly suiting for this type of material. In addition to the enjoyably disgusting sound, there’s a lot of switch ups in the sound and that’s to their benefit, particularly with the longer song lengths they go for (most run 6-7 minutes). So the band does their fair share of ramping up the speed and firing off some dizzying riffs and blastbeats (with some technical riffs in a more Pestilence/Atheist route), groove into some mid-tempo stuff and dig into some melodies (while staying in line with the tone), and even dip into some slower and almost doomy tempos on occasion. The result works for the band, and the title track, which is arguably the centerpiece of the album, showcases all of the qualities that have just been described. A slow, grinding build-up as more ooze comes out of the guitars and they kick the tempo up a few notches before sliding into a melodic solo. While it may not hit the frantic tempos of say, “Irreparably Corpsed,” it’s a great track that showcases what they can do.

Speciation is a solid death metal album, through and through. The melodies and tempo changes help deliver just enough variety to satiate the listener, and the filthy sound is one that the band should rightly champion in the future.