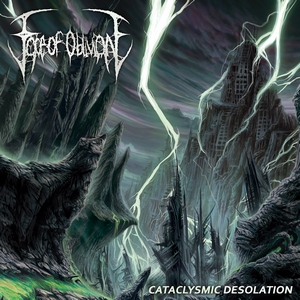 The stigma of what today’s “technical death metal” label can imply – sterile exercises that often undermine brutality in attempt to create something that wows the listener – is something that Minnesota-based Face of Oblivion thankfully stays away from on their second full-length effort, Cataclysmic Desolation. Instead the act manages to combine intricate passages with the right amount of brutality to back them up.

In some ways, the feeling of Cataclysmic Desolation brings the listener back to a time when death metal brutality reigned supreme over all but without the sometimes problematic production. But it’s also possible to draw some comparisons to that of Origin (in fact ex-Origin vocalist Jason Lee was a member here as well, but this time replaced by Incinerate’s Jesse Watson), if Origin went further into more groove-friendly territory. There’s plenty of hyper-speed worship done by Face of Oblivion, but the album never ends up feeling like a blur. This is due to the use of a number of tempos, with the band not afraid to go from a real ripping speed and bury their heads in groove. But even when going at full-bore speeds, the band is able to maintain a heaviness that many simply ignore – making it more of a double threat that entices and grabs the listener’s attention. Also adding to the palette is that of some rather distinguished guitar solos and thought-out leads – some rather ear-catching stuff for the style despite the frantic speed. There’s a technical element involved, but doesn’t go out of its way to make sure it’s the spotlight at all times – it’s more to serve the purpose of each song.

Cataclysmic Desolation is an impressive sophomore effort by Face of Oblivion that balances intricate songwriting with punishing riffage. It doesn’t askew the death metal template, but it sure does put all of the pieces together in a way that provides an enjoyable and abrasive romp from beginning to end.