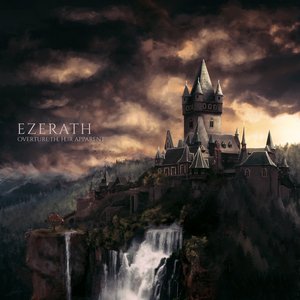 Though often relegated to the black metal genre, there’s a small percentage of one-man death metal acts. Jeremy Vocino-Montpetit is the mastermind behind the Canadian progressive death metal act Ezerath, and Overture: The Heir Apparent is the first in an ambitious line of a multi-album concept. Important to note, because this sounds nothing like a one-man show if you listen without said understanding.

A fully realized concept gives the album a strong setting to work within. It’s clear that some time has been spent designing the music as well as the concept, and it allows for some strong flow as you move through the release. While you can define the sound of Ezerath as that of modern death metal, there’s bits and pieces from both the tech and progressive sides, as well as some symphonic elements that make for a sweeping listen. The strongest part of the album is the riffing – which takes from some of the modern greats in these areas (think Black Crown Initiate, Rivers of Nihil, Fallujah, and shades of Opeth). Some intricate stuff at the faster tempos, but still with a grasp for use within the context of the album (see “Hand of a Serth”) while some truly gorgeous leadwork tends to pop the most when the music slows down a bit (“In a Gale of Inferno”). All in all, this is an area that many should walk away impressed – additionally there are lots of fantastic transitions and alterations to tempo and mood within the same track. The story also allows for a sense of progression as you move through the album, allowing the closing “Eternally Mine” to have a more emotive punch than you might expect.

Lots of promise to behold with Overture: The Heir Apparent. Will be interesting to see how future offerings tie back in, as well as the musical progression considering the strong start.