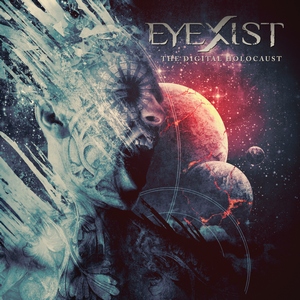 “Avant garde” death metal isn’t a tag that’s easily blown off. Initially finding Exexist on Bandcamp prior to the album’s release, the first thing that stuck out was the wicked looking and futuristic artwork of The Digital Holocaust. Matching the artwork in its scope and breadth, Eyexist have designed an album that should speak to many within the death metal community with a familiar backbone that stretches out into a number of different fields.

Consisting of two piece Francis Bouillon and Jean Beaulieu (with session drums from Kataklysm’s Oli Beaudoin, who also produced the album), it only serves to make the music sound even more impressive. There’s an ear-pleasing heaviness and abrasion level to the act, which could draw comparisons to both Fear Factory and Scar Symmetry in some regards to their cyber and mechanized take on progressive metal – but that also fails to account for some of the jazzy time signatures that one usually associates more with tech death. There’s an equally heavy sci-fi flavor to the album, which certainly takes some influences from both cinema and video games in this regard. Truly there’s much to take in, and as the cliché goes, there is plenty to peel away upon frequent listens. But really, the most important piece that Eyexist nails is flow. You can deconstruct the songs to get to their influence and make-up, as you listen to a sonically expansive track like “Inside the Machine,” which juggles sci-fi ambience, thick grooves, and mechanized riffs, you’ll be more interested in just how compelling the whole thing sounds.

Sci-fi influences aren’t rare these days in the death metal sector, but Eyexist brings a unique scope and view in which they are handled. The cinematic approach to death metal makes for an engrossing listen that laces a new-found sense of excitement to the aggressive riffing beneath it – giving it added depth without causing it to feel sterile or forced. Eyexist have something special going on and carry much potential going into their second album.