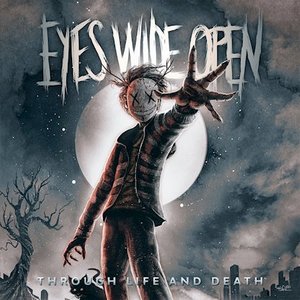 Ever wonder what Soilwork would sound like if they continued to flirt further with modern metal instead of veering back into more melancholic waters with The Living Infinite?  If the answer is yes (or your curiosity is now piqued), Swedish act Eyes Wide Open is ready to serve you up their latest album, Through Life and Death.  Gaining traction over several releases to this point, the band has now joined up with Arising Empire Records to give them some added reach.

The premise really is as simple as it has been described.  That mid-2000s Soilwork and In Flames sound, where they gelled together elements from melodic death metal as well as the then-emerging metalcore sound from the States, is what you can expect here.  Some of the more modern elements have indeed moved along with the times, making Through Life and Death feel more current than being stuck 15-ish years in the past.  In short, it works.  The first few tracks come hitting hard and heavy with the melodeath side of things (“Fallout” is full of that swinging groove and mid-tempo stomping melodies, along with a catchy hook of a chorus), but as things progress, so does the more modern, melodic side of things.  Those gang/choral clean vocals pop up, but they never take centerstage thankfully.  Eyes Wide Open is experienced enough to grasp that what will set them apart is the emphasis on guitar melodies, so even a more modern cut like “Eraser” still has plenty of keyboard moments that pop, as well as some thick, chunky groove at spots.  Poignant and strong clean vocals also hit the spot, such as in “Where Death Meets Paradise,” that carry the music when needed without garnishing all of the glory.  It’s truly a band effort, and not just a vocal-forward performance, and that aids Eyes Wide Open quite a bit.

Through Life and Death carries that mid-2000s melodeath meets metalcore spirit and gives it a fresh 2021 coat of paint that manages to grab the best elements of both and merge them into something that’s both emotive and fun.  Certainly worth looking into if you enjoy that sort of sound – Eyes Wide Open have it completely nailed.