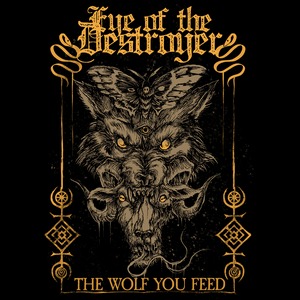 Sometimes a little bit of high-octane aggression is in order. New Jersey’s Eye of the Destroyer are familiar with the level of violence necessary to achieve that means, and their latest EP The Wolf You Feed is bound to get your body moving a bit. The band’s hardcore meets death metal attack is primal and sure to leave a visceral impression.

While last year’s full-length, Baptized in Pain, suffered a tad from being on the longer side of things (it was over 45-minutes in length after all), The Wolf You Feed doesn’t not face that handicap. Instead, a concise, under 20-minute attack is the game plan, and it bears teeth from start to finish. Like their previous material, it doesn’t right to saddle the band with a deathcore tag. The music does have an immediate link to hardcore, particularly when they dig into some chugs like on “Colder,” but the way that it merges with death metal aggression keeps it more in line with some of the NYDM bands from the ‘90s than a mere deathcore vibe. The hardcore side of the act is more prominent, and some of the grooves that “Scapegoat” flings towards the listener are the type that are sure to get a pit moving with reckless abandon. The vocals also have that hardcore bark to them, even if some more deathly growls surface for variety’s sake.

The Wolf You Feed is an angry, pissed off record. It’s short and punchy, and while it doesn’t exactly tread much in terms of new ground, it will absolutely get you headbanging and attempting to destroy some nearby property. The immediacy of the hooks and chugs are bound to pull in many a listener who wants to blow off some steam.