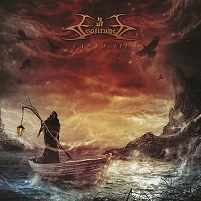 Anyone subjected (willingly, of course) to the perils of funeral doom have probably had to ration off the moments that count; you know, the glance of a soothing melody, or the rare occasion when the tempo wakes up the sleeping metronome. Well-rounded music this is generally not, yet for the likes of England’s Eye of Solitude, their need to engage in dalliances with funeral doom, charged extreme metal, and mournful Goth do indeed comprise several countable moments, ones that happen with enough frequency to make Canto III a worthy endeavor.

Based on Dante’s Inferno, Canto III seizes the atmospheric slot necessary for ample persuasion. As in, it’s one thing to blast or snail-trail one’s way through an album, it’s entirely something else to position these ideas at the right time, such as the extremity amplification on opener “Between Two Worlds (Occularis Infernum),” which is the sort of foundation-laying number an album of this type needs. The sorrowful melodies (clean vocals + piano included) on “Where the Descent Began” tips the album in the lush favor, where the band’s fully-realized ideas are allowed to spread, while the stifling slow-mo of “He Who Willingly Suffers” and careful melodic plod of “Sat in Silence” evoke, uh, Evoken…at times.