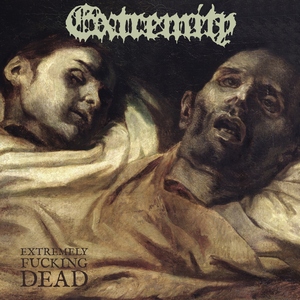 Never at a loss for sludgy, slimy death metal, still more bands continue to pop up to push the filthy style forward. New upstarts Extremity aren’t as new as you may think, containing members from more veteran acts such as Vastum, Worm Ouroboros, and Cretin, among others. So with a veteran’s touch, Extremely Fucking Dead feels more like an apt pupil than your usual take on the field.

Combining the usual suspects (Autopsy, Carcass, Entombed, Incantation, you get the point) into a gritty mixture, it’s not exactly fresh but it gets the point across. The galloping and burly tone of “Crepuscular Crescendo” doesn’t take long to establish the band’s presence, and a quick leap into a melodic lead amongst the chaos certifies that they are going to make it a memorable venture. Frequent tempo shifts help to keep the motor running and the riffs flying, as everything from murky doom-waters to blasting speed gets its turn in the rotten spotlight. It is admirable that the band set their sights on so many of the influential movements of the ‘90s, as it gives them a bit more wiggle room than if they had just stuck with say, a Swedish or purely American rendition. The ‘90s vibe does hit hard, regardless of the focal point – be it artwork, logo or music itself…but it’s done with genuine feeling. Not to mention the energy that tracks like “Chalice of Pus” or the title track have when the riffs start zipping around with reckless abandon.

More of an exercise in revisiting and revitalizing the past than going out on a creative limb, it still doesn’t hold Extremity back in their execution. Those who seek out old school death metal know when it has it’s decaying heart in the right place, and Extremely Fucking Dead comes off as the genuine article. 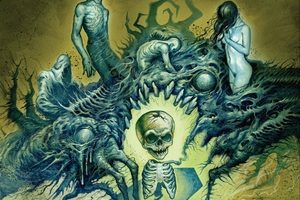