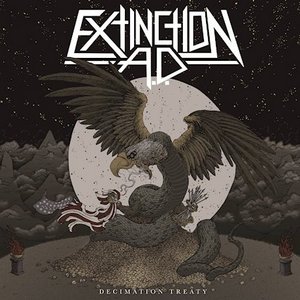 Mostly comprised of members of New York hardcore/punk act This is Hell, Extinction A.D. hit the ground running with their first release with Faithkiller back in 2015. All but extinguishing any elements of ‘core, it was a straight up thrash/crossover that reveled in old school energy and power. Switching out guitarist Christian Beale for Ian Cimaglia, the rest of the band is still intact for a second helping of frantic thrash with Decimation Treaty.

With their approach being rooted in the essence of the genre and spicing it up with a modern recording, most know what they are going to be getting into with Decimation Theory, but it’s far from a bad thing. There’s more than enough charm in their straight-ahead and ripping thrash/crossover attack that those keen to the style will be more than ready to embrace it. The album barely gives you a minute to catch your breath, with throttling efforts from the start with “Legions of the Grave” and “Secret Worlds” priming you for what’s to come. Galloping riffs with a Slayer-esque feel fully embrace aggression, with a few moments of slowdown for a barked chorus or ramped up solo help to keep some further dynamics in check, as do mid-tempo ‘bangers such as “Age of Reverie.” Some well-executed gang vocals are also employed in a few tracks (see “Rats in the Attic”), but no real surprises end up flowing through the speakers. However, the title track closes things out in instrumental fashion and sits at nearly double the length of any other track here. It’s a credit to the band that a slower and more melodic cut still fits in with their ethos, and it stays remarkably fresh right until the end due to a wise decision to focus on some dizzying solowork and punchy riffs.

It’s all about the riffs when it comes to Decimation Theory. Embodying the frantic and vitriol-fueled aggression of thrash at its core, it doesn’t really reinvent the wheel per say, but the intensity and sheer musicianship gives it just the edge necessary to entice listeners for frequent return listens.