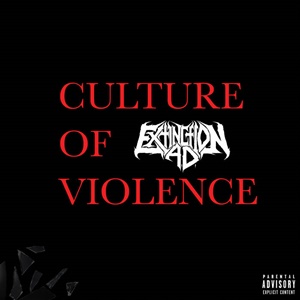 The progression of acceleration for Long Island crossover/thrash act Extinction A.D. in terms of touring and releases has been exciting. Active since 2013, they’ve managed to stagger the release of four EP’s and two full lengths over those years, performing on tours and festivals with acts like Obituary, Thy Art Is Murder, Havok, Testament, and Exodus among others. Hooking up with Unique Leader Records may be a difference maker, as the label is best known for its deathcore/ technical death roster – setting the stage for the third album Culture of Violence.

Listeners can expect a potent display of crunchy riffs and bouncy tempos plus fierce crossover-style vocals – combining influences from the original thrash brigade as well as the modern accents that crept up during the late 90’s/early 2000’s to be an interesting, dynamic musical stew of arrangements to consume. Guitarists Rick Jimenez and Ian Cimaglia create crushing combinations of riffs, spicing things up with ripping leads and occasional harmonies to support the hooks in all the ideal ways – check out the lightning staccato-crunch parts during “Mastic” or the Testament-like meets straightforward metal passages for “Behind the Times” for garnering ideal devil horns axe approval. A love of NYHC/Biohazard comes storming through the groove-parts and breakdowns that contrast against the speedier elements during the opening title track, while you can hear the frenzy of acts like Slayer and Machine Head careen through “Praise the Fraud”, Rick doubling up as vocalist with a Robb Flynn-like charm whirling his lyrics at breakneck ferocity. You can tell the seasoning of the road has transformed the approach for the quartet – leaner arrangements, tighter combinations, picking dynamic spots for laying off the accelerator and letting the low-end groove plus gang-like vocal parts shine in “Dominion”.

Extinction A.D. have the right hardcore, thrash, and groove influences to gain massive appeal on diverse tour packages – hopefully accelerating the sustained appeal because of the strength of material present on Culture of Violence. Feel the passion, mix things up, and come away feeling better from this adrenaline rush of a record.