Exterminated – The Genesis of Genocide (Comatose) 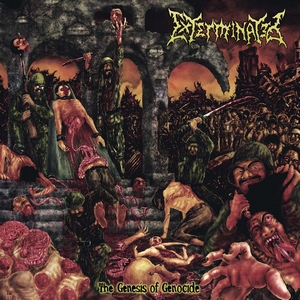 No doubt, The Genesis of Genocide hits all of the appropriate marks for recreating a mid/late ‘90s piece of brutal death metal with aplomb. The tin-can drumming, the low and indecipherable gurgles, and frantic riffing all vie for your attention as the band rips through nine tracks with nothing but the most brutal intentions. Some slowdowns do occur along the way (see “Detrimentum”) but expect volleys of blastbeats, putrid vocals, and high-speed riffs of the most vicious variety. So for fans of the genre, they can easily stop there as Exterminated will give them exactly what they are looking for. But for anyone else, the problem is exactly what you’d imagine. In Exterminated’s attempt to bring forward the most chaotic brand of death metal around, there is not much to differentiate track from track besides the sheer brutality of it. As predicted, the whole thing becomes the usual ‘death metal blur’ due to the extremity of it.

No need to really belabor the point of an album like The Genesis of Genocide. It closely follows the brutal template of bands like Devourment and company from the earlier days of the genre and wears its bloody heart on its sleeve. It delivers full on adrenaline from beginning to end. Perfect if that is what you are seeking, but also know that it is entirely a meat & potatoes type of release – one that some will find equally predictable and a tad on the generic side. Where you fall on that line is entirely due to your own preference for the genre.