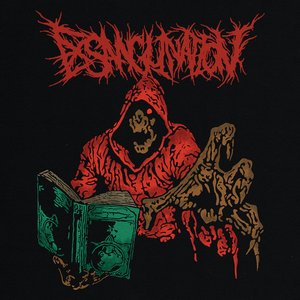 Next in line with Swedish death metal worship is that of Massachusetts’ Exsanguination. Their debut full-length, Spectral Hymns, does everything that you would expect a release like this to do. It hits all of the sweet spots and leaves you satisfied by its finale.

Not really much to use to differentiate Exsanguination from the growing hordes, save for one thing really. The vocals used here are a bit raspier and more caustic sounding. Which does give them a slightly more fresh take than everyone continuing with the darkened barks. But outside of that, the HM-2 pedal hits hard, and the band uses their mid-tempo weight to fling in as many different melodies as they can muster. This is actually the band’s strongest asset. Each track is more or less packed with catchy moments in the form of grooves, melodies and solos, and it combines with the buzzing, steamrolling riffs in such a way that you can’t help but get into them (see “Blood Ocean”). Even a more blast-y number like “Lords Without Thrones” can still delight in a memorable solo and chunky grooves as they pick up and maintain speed.

Exsanguination show that they have a strong background in what made the Swedish death metal scene flourish. While they never really go outside of the established boundaries, they do still provide the two most important factors for any band of this ilk. They know how to make the energy palpable with buzzing and raging fury, and at the same time, temper in some melodies to keep it catchy enough to remember after a listen or two. A solid first effort.