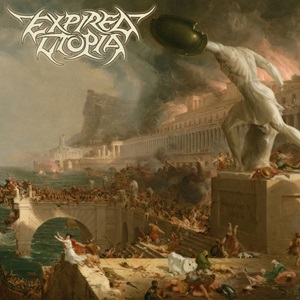 Winnipeg power metal band Expired Utopia formed in late 2014, honing in on a power metal style that has more in common with homegrown North American influences than anything more Euro-happy oriented. This self-titled 3 song EP gives listeners a good grasp of all facets to the quartet’s outlook – with longer instrumental sections and overall epic arrangements to flesh out the almost 28-minute running time.

No less than five guest guitarists provide lead help on these tracks (most notable being Into Eternity’s Tim Roth) – but given the proclivity for songs that range in the 7:55-10:15 range, it’s no wonder that different phrasing and shredding can take place. Bassist/guitarist Ryan Forsyth even gets a low end progressive break during the 3:12-3:40 section of the opener “Chasing a Tattered Flag”, a monumental roller coaster of a power cut, featuring loads of heads down triplet-oriented riffing and drop on a dime tempo changes from straight ahead metal to almost thrash-like capacities. The progressive nature of certain sequences in terms of double kick/fill choices against the ethereal chord choices makes “Defining the Gods” one of the highlights for sure – the Middle Eastern/exotic oriented riff swirl reminiscent of classic Symphony X if put through some Control Denied paces. These musicians know when to stride into a sequence and let the nuances take control – but also accelerate things if necessary to showcase proficiency at their craft.

Where many power metal bands fail is having a singer capable of matching the abilities of the music at hand – fortunately for Expired Utopia, Mike Toews exceeds expectations, as his command and multi-octave range brings a lot of Matt Barlow comparisons during his Iced Earth prime against (believe it or not) Paul Stanley. From lower finesse to higher note holds the man has the pipes to carry the Canadian power act places – especially when choosing multiple harmony options on the title cut closer, where drummer Derrick Kroll delivers some sick snare to fill and back tempo changes that you rarely hear from metal drummers these days (the sequence from 2:25-3:25 breathtaking between hi-hat, double bass, and twisting grooves). Going the self-financed route, the production values are surprisingly valid against label product, which is not easy when you have so many layers and sonic elements coming at you in this platform.

In the end, Expired Utopia hopefully will see their next release becoming a full-length, as they possess all the requisite tools, songwriting, and musicianship to keep interest as evidenced here out of the gate.