Expain – Just the Tip (Self Released) 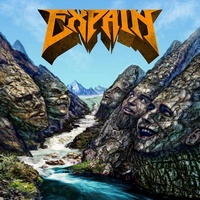 Really thought the absent “L” in Expain’s name was a typo of some kind…but it’s not. The band are fine with the name as is, which means they have some expaining to do for their name, Expain. At any rate, this Vancouver-based quintet has been kicking around for roughly a year, holding true to a technical, semi-Swedish, certifiably cut-throat take on melodic death metal. Actually, Just the Tip (which is their debut) is more on The Black Dahlia Murder side of melody than anything Gothenburg, if you catch our drift, but don’t sleep on the band’s playability – it’s the album’s defining trait.

Just the Tip is self-released, but it’s total pro, especially on the production side of things, giving the guitar action of Eric Morrison and Pat Peeve some serious lift and heft during the album’s more upward moments, such as the beginning of “Don’t Worry, the Worst is Yet to Come,” and “Headbang Your Head Off.” And yeah, the band is totally taking the piss out of things, but they’re not exactly what would one would call as serious either. So Expain’s partial quirkiness is a nice little edge to the songs with a more defined progressive edge, ala the excellent “Aggressions Progressions.”

Rather curious to see how the band’s not-serious angle will play out in the normally conventional and totally straight-faced melodic/progressive metal scene. There’s really not that much in-between for bands to operate in; you’re either one extreme or the other, and Expain are somewhere in the middle, probably leaning a bit too much on the goofy side to scoop up the Arsis and/or TBDM crowd. But then again, a lot of Just the Tip feels fresh, plus the playing is top-notch, with ample grip in the melodic department. A definite promising future lies ahead for these Canucks.