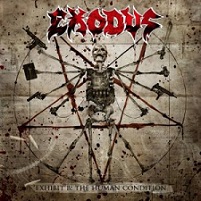 Not sure if this is a good or bad thing, but Exodus (in their old age and infinite wisdom) have entered into the realm of predictability. From a mile away, we could have guessed as to how The Atrocity Exhibition: Exhibit B – The Human Condition was going to sound…it was going to sound like The Atrocity Exhibition: Exhibit A. Hot-shot producer Andy Sneap was onboard, thus securing the sonic template, all Gary Holt and co. had to do was lay down the polka beats and vitriol from singer Rob Dukes. And they did.

One barb that is immediately going to be tossed at the band is in regard to long these songs are. Sure, Exodus made a living in the 80’s out of extended thrash jams where the vocals often came in after a few repetitions of the main riff (see: “Fabulous Disaster,” “Pleasure of the Flesh,” etc.), but now they’re really pushing it. Case in point, opener “The Ballad of Leonard and Charles,” “Beyond the Pale” and “Class Dismissed (Hate Primer)” all go beyond the seven-minute mark and they’re placed in the front half of the album (which is a whopping 74 minutes long). Good thing Holt armed himself with some of his trademark deep, pulsating riffs or Exodus would have been in trouble.

Shards of melody creep into the aforementioned “The Ballad of Leonard and Charles” and “Downfall,” thus giving the album a tad more variety than Exhibit A. Mid-paced numbers like “Nanking” and “Democide” provide a welcome respite from the constant thrash beat provided by drummer Tom Hunting. And Dukes sounds more aggro than ever, emerging as the star of the show. Credit this to some non-PC lyrics on “Burn Hollywood” and “Good Riddance,” that pull no punches, just the way thrash should.

Make no mistake, Exodus are as relevant as they’ve ever been. In fact, no returning thrash band is as brutal as Exodus, but in spots, Exhibit B sounds like they were sticking a little close to the thrash textbook. Funny we say that, as everyone used to cry about bands abandoning thrash (read: The Big 4), now some of these bands are getting too comfortable with it again. Don’t pass onExhibit B though, it will tear your head off…as predicted.